The provinces performances so far this year comes as no surprise given it entered 2019 with increased nomination allocations for several provinces and higher overall admission targets. 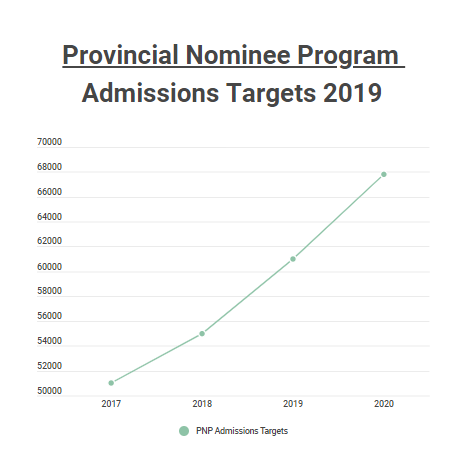 Some PNPs are aligned with federal Express Entry system to invite skilled and qualified workers permanently. The Express Entry was extremely active in the first six months of 2019.

The Express Entry manages the pool of candidates through three economic immigration programs namely Federal Skilled Worker Program, Federal Skilled Trade Program, and Canadian Experience Class. Each candidate is awarded a score based on the Comprehensive Ranking System (CRS) based on factors that include age, educational qualification, work experience, and language proficiency.

When applying through Provincial Nominee Programs, the selected express entry candidates will be awarded 600 additional points towards the overall immigration points.

Ontario’s 2019 immigration target is set at 6,900 nominations. This is the largest immigration number for the nine provinces and two territories that take part in the PNP. Ontario receives the greatest share of newcomers to Canada every year and was the immigration destination of 64 percent of new permanent residents that applied through Express Entry System in 2018.

The Ontario Immigrant Nominee Program three express entry linked streams were most active in the first half of 2019 issuing a total of 3,846 Notifications of Interest (NOI) to Express Entry candidates. Of the total 3,846 NOIs, 67 percent (2,565) were issued through the Human Capital Priorities Streams in two draws, with minimum CRS score 439.

Also, Ontario first Tech Draw was held on July 8 and a total of 1,623 Express Entry candidates with CRS score 439 and above were issued. The OINP French worker stream was also active in the first six months of 2019 inviting 1,281 NOIs.

A job offer or previous work experience in Alberta is not required when applying through express entry but candidates must be working in an occupation that supports “Alberta’s economic development and diversification priorities.”

Alberta held 16 draws through AINP stream issuing a total of 3,816 NOIs to the applicants with a minimum CRS score requirement of 302 or less.

The Nova Scotia Nominee Program is one of Canada's most innovative nominee programs and thus, conducted Nova Scotia draws on a timely basis in the first six months of 2019.

The NSNP invited applicants through its Labour Market Priorities Stream who had work experience in specific occupations. A job offer or minimum CRS score is not always required to apply NSNP.

The June 3 draw targeted 312 Express Entry candidates with work experience as early childhood educators and assistants without any CRS requirement. Whereas January 25 draw was conducted for financial auditors or accountants had a CRS cut-off 400.

Saskatchewan province of Canada also had the busy first half of 2019 for its International Skilled Worker: Express Entry sub-category

The Saskatchewan Immigrant Nominee Program (SINP) held eight invitation rounds through its Express Entry sub-category during the first half of 2019. A total of 1166 invitations to apply for provincial nomination have been issued so far.

The other provinces of Canada that are also Express Entry linked were also active in the first six months of this year. These provinces are Manitoba, Prince Edward Island, and British Columbia.

For further information related to different Canada PR programs and other eligibility conditions, fill the Canada Immigration Assessment Form to arrange a callback from one of the visa experts of Aptech Global.